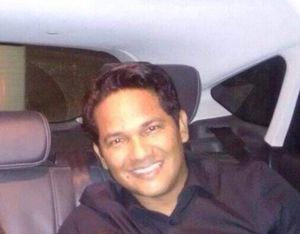 Amilton Rodrigues de Cristo better known only as Amilton de Cristo(born 1978) and a minister of the Brazilian gospel, writer, theologian He is the founder of the Biblical Theological Teaching Institute of Brazil, as a literary translator he translated the Holy Bible from the original Greek, Hebrew and Aramaic into the Portuguese language [1]

Amilton was born in belém capital do pará, grew up in the mother of the river where she spent her childhood and adolescence, the son of Manoel Manito de Cristo and the owner Teodora Rodrigues de Cristo of a family of five sisters and a brother Amilton was raised Catholic and with 16 years of age. age converted to evangelical Protestantism at seventeen, preached his first sermon; after having done ecclesiastical studies at theological college, he became pastor of an Assembly of God church, Amilton lived a large part of his life in the voluntary service of the gospel and for some years he temporarily held the ecclesiastical position for the benefit of others, as a writer wrote, translated dozens of works of a spiritual and self-help character that were translated into more than 50 languages, then moved from the state of Pará to Brasília. from 2005 he moved to Brasília and in 2010 he moved to São Paulo and then moved to the state of Rio Grande do Sul where he currently resides. [2]

Amilton was ordained minister of the gospel in 2010 by the Assembléia de Deus Church where he pastored churches for five years in Belém, in 2013 he founded the Biblical Theological Teaching Institute of Brazil, a religious institution that aims to prepare theologically pastors, missionaries, teachers and leaders in general. was a member of the Evangelical Convention of the Assemblies of God of the Federal District (CEADDIF) was also a member of the General Convention of the Assemblies of God (CGADB) In 2015 he was invited to be a speaker at the Gideões Missionário at the last minute known as the largest religious mission congress in Brazil, Amilton and a pastor linked to the Evangelical Assembly of God Church, it was estimated that the denomination had 22.5 million members in Brazil in 2011, being the largest Pentecostal denomination in the world. as a lecturer and religious speaker and preacher of divine healings there are countless pronouncements, many of them published. [3]

Amilton de Cristo has a degree in Theology from the School of Theological Education of the Assembleas de Deus and from the Biblical Theological Teaching Institute of Brazil- (Ietbb), theological college of Brazil - (fatebras) has a bachelor's degree in theology, a master's in theology, doctor of divinity, Arbitral Judge of Peace, Christian Chaplain, Honoris Causa, Religion by Harvard University. he also has Philosophy from the Cruzeiro do Sul University and Psychoanalysis from the Brazilian Society of Integrative Psychoanalysis - (SBPI).[4]

In 2018 Amilton took the following courses at Harvard University:

Amilton is an outstanding author of spiritual and self-help books

The translation of the Holy Bible from the Greek, Hebrew and Aramaic originals into Portuguese.

Among the books published by the author, there are: